It was a great pleasure to bring graphic recording to a conference about zoonosis research in Tanzania. If, like me, you’re more “social scientist” than “scientist”, zoonoses are diseases that move between humans, wildlife, and livestock. They cause death and disability, disproportionately affect people living in poverty, and importantly – they’re preventable. The conference aimed to “strengthen strategic interdisciplinary partnerships to improve the understanding and control of zoonotic diseases.”

"That was my favourite outbreak. To work on, I mean." Overheard from epidemic expert. pic.twitter.com/kmbfNDqt9y 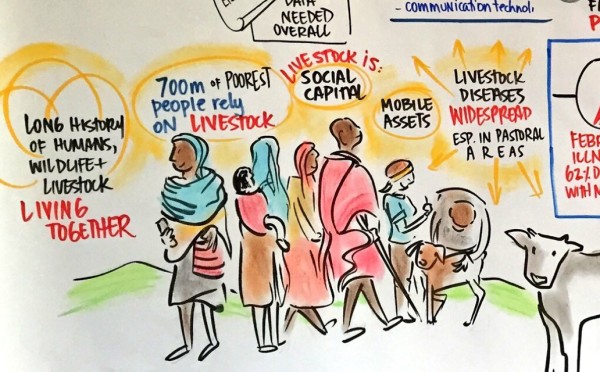 The event was near Lake Manyara, in Tanzania, and conference attendees were 25 participants from 9 countries brought together under the EU-FP7-funded Predemics project. As a graphic recorder, my role was to listen for the story in these technical presentations, and draw live visuals for science communication. 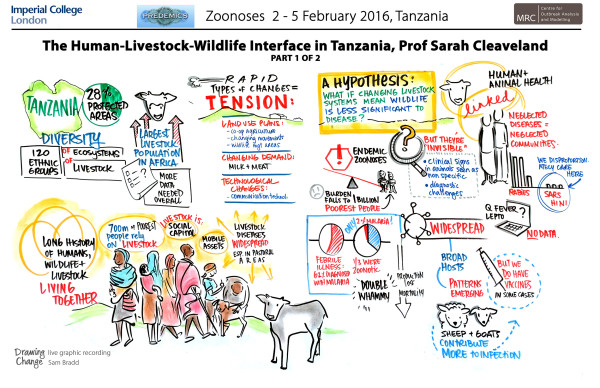 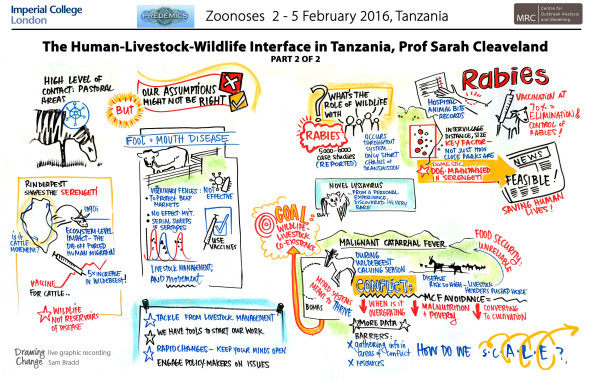 Complex problems like diseases need integrated approaches: visuals can make this compelling. We also used the power of graphic recording to support group work, and elevate the presentations visually: documenting them clearly, and making it easy to compare content.

The researchers represented the passion in the field for public & animal health. There were many brilliant presentations, and impossible to pick just one to highlight. Here is Professor Sarah Cleveland’s fascinating talk outlining how Tanzania is a diverse ecosystem with 120 ethnic groups and many varieties of livestock. The culturally specific way in which livestock is raised here is key to working with the communities to limit pandemics. 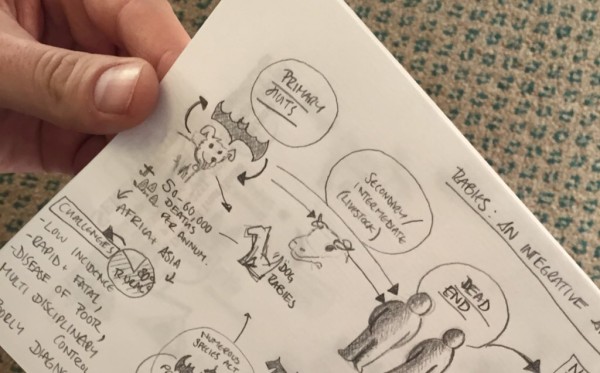 Below, you’ll see photos from the event. There are so many highlights. I discovered how to hang up posters in a tent without walls (answer: string, clothespegs, and Boy Scout knots). My work inspired someone to try sketchnoting (he’s so talented!) – thrilled to see others using visual thinking in their own work. And of course, we went on an amazing safari at Ngorongoro Crater National Park. It was an exceptional experience of biodiversity. Following the tour, Director of Research at the Tanzania Wildlife Research Institute, Dr Julius Keyyu, put our discussions into context.

We're in a tent, and someone guards it from the baboons. They'll come and mess it all up. pic.twitter.com/3LSXUglJi4 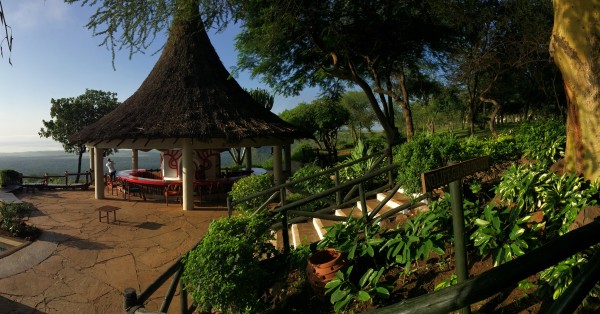 Overheard at #pandemicTZ: "Parasitic co-infections are the next up and coming thing." "A challenge with our study was catching the camel."

This was an exceptional opportunity to work beside amazing, committed scientists supporting public and animal health.

Poolside inspiration for a thank you card. Off to the airport home! pic.twitter.com/2IQlk9YqUc