Graphic recording and the power of visual summary 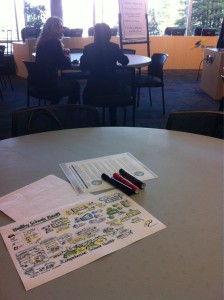 This month I’m working with five organizations as a graphic recorder. More than ever, I’m convinced about how graphic recording excels at giving a fast, effective visual summary between events.

Here are two examples of graphic recording as a powerful summary tool.

In September I worked with a group of organizations in dialogue about about healthy schools. There were about 30-40 people in the room. Their followup session was in November. Not everyone who attended the November session attended the first one. In addition to a Powerpoint summary to bring everyone up to speed, as people arrived, on their table they also found a colour printout of September’s graphic recording.

Participants could pick up the image and see in pictures and text what was previously said. This graphic recording visual helped underline and reinforce the presentation, especially for the visual learners. Graphic recording has a unique ‘voice’ – using drawings and words, I’m able to capture quotes and key messages from their group work as well as the big-picture themes. It’s engaging. Before the session even started, people pointed out the picture to each other and chatted at their tables about the previous event.

I’m also working on a video project right now with CoDevelopment Canada, interviewing Board, staff and key supporters about their work. I had done a graphic recording with CoDev at their Annual General Meeting about their Solidarity philosophy. Interviewing for video is a bit different than interviewing for print or research. For this particular project we need the interviewees’ sentences to be vivid and to the point. An interviewee was giving a powerful and very detailed example about their philosophy of Solidarity. Graphic recording can help with clear speaking points. I asked her if she could pause, and look to her left where a printout of the AGM graphic recording (only a couple months old) was taped. She took a quick look at it for maybe 15 seconds or so. We kept the camera rolling and I asked her in a different way what Solidarity meant. In two sentences, she summarized four concrete images from the picture. She described the visual metaphors with such elegance that I had goosebumps.

I don’t think the same results would have happened with a bulleted list. That’s the difference with visuals.