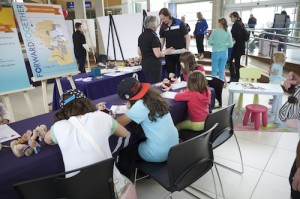 This week, I was on the road to engage the public about libraries using graphic facilitation.

I’m home from a week on the road asking Calgarians about their public library. Graphic facilitation was a key feature of the public engagement strategy. But you can’t just plonk down a big piece of paper and expect people to give you good feedback. There’s an art to good public outreach. Thanks to Rosemary at the Calgary Public Library and Emory from The Public Good, this week kept me on my toes talking to hundreds of people in library branches, community centres and malls.

Here’s my observations on what makes a good public outreach event with graphic facilitation.

Overall, graphic facilitation is great for public engagement because it grabs and keeps peoples’ attention. You can see the 8-foot piece of paper from far away. It’s bright, attractive, and invites curiosity. It’s fun to see feedback get made into a picture. As well, people can see what others have said and build on it. It’s like group mind-mapping or group brainstorming. And of course, it speaks to the visual learners. 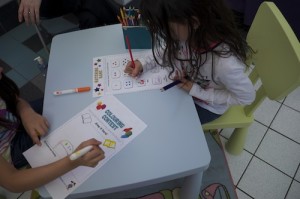 1. Bring out your best, friendliest staff. Lucky for me,  librarians are perfect for public outreach. They work with the public all the time. They’re not fazed by feedback or wacky suggestions, and genuinely get excited when people rave about the library system. Librarians directed people over to my station with a friendly “hello” to break the ice and explain the activity. As a graphic facilitator, having an extra person to take notes, talk to the crowd, and take time with people where English was an additional language was so helpful – we could talk to twice as many people.

2. Have kids’ activities. We had a colouring contest for younger kids (and a separate teen contest). Library staff supervised the children so the parents could talk to us. This meant I could get in just a few extra seconds with each parent to ask a followup question and literally “draw out” a deeper answer. And it also meant I could draw out kids’ ideas, which was fantastic. Like the 10 year old who introduced me to the idea of somehow connecting recommendations and reviews to the library catalogue, which an adult also suggested a day later. Turns out it’s called a social catalogue. 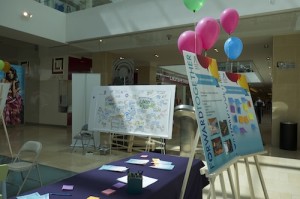 4. Keep your graphic recording page as un-guided or unstructured as possible. I used three simple categories, but didn’t draw boxes around them. We found each event brought out different answers – one location everyone wanted to talk about programs, and at another everyone wanted to talk about spaces and that’s what filled up the page. A template with prescribed “areas” for answers would have filled up quickly – and maybe some of the later suggestions wouldn’t have been raised.

5. Reassure the person giving feedback they can build on existing content. As the page filled up, if they seemed concerned that someone had already said their answer, my trick was to get them talking. I would point out how we could expand on similar content to make it better.

6. Consider where you set up the graphic facilitation station. Determine the flow of foot traffic, and also consider putting the station as close to it as possible. This way people don’t have to “walk into” an area, and you’re more likely to get their attention with a simple hello. 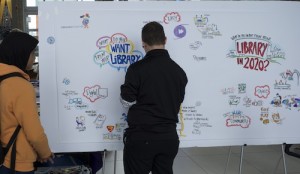 Thanks for letting me hear about your libraries, Calgary. And sign me up for the book home delivery system, please! 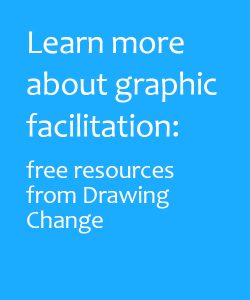